Similar to our sister site Baetyl, we will now be enforcing a rule of constructive criticism v destructive criticism. Wolfhome wants to be a safe place, not only for our community members but also for those who are volunteering. We want minimal stress all around, with that being said voicing your concerns about being unhappy with something in a constructive way will be appropriate, whereas a destructive way will no longer be allowed and will fall under disturbing the peace.

While we will be encouraging feedback, we will only be allowing it in a constructive way. This can be to point out our mistakes, flaws, room for improvement, or anything of the sort. We want to ensure everyone is aware of the differences between the two as they are both very different.


Things to note on Constructive Criticism:

Things to note on Destructive Criticism:

- It's usually vague
- Meant to harm, belittle, mock, or insult someone often times it makes the person feel worse
- Does not offer suggestions or tips
- Focus on the creator of the work instead of the work itself
- Conflict and Negativity
- Tears down the idea

Wolfhome will have Zero Tolerance for all Destructive Criticism from here on out, any and all criticism that is deemed destructive will mean action is taken against your account.
4 x 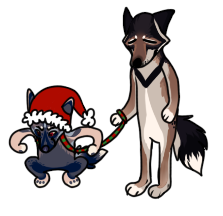